The Evangelist of Peppers: Hugo man puts premium on peppers

Steve Marier walked between rows of pots lining his driveway in Hugo, stopping often to point out different chili pepper plants — and struggling to rank them against one another.

“I’ve got 275 of them,” said Marier, who has helped introduce dozens of exotic peppers to Minnesota. “Everybody asks me to pick a favorite, and it’s impossible to do because it depends on what you’re going to use it for.

“If you want just a snacking pepper, a lot of these sweet ones are really good just to chew on,” he said, strolling ahead. “I like the Brazilian Starfish, just for a little bit of heat, something that you can grab and snack on. The habanada is going to give you a habanero-type flavor, a tropical fruit flavor, but without the heat. If I’m making stuffed peppers, I like to use some of the hablanos.”

Marier’s passion for exotic peppers started about 25 years ago when a friend returned from a Caribbean cruise with a small hot pepper he had purchased at a farmers’ market.

“I had never had anything that hot,” Marier said. “I was really intrigued, so I saved the seeds from it.”

It took a couple of growing seasons, but Marier finally started getting fruit. The trick, he said, was planting really early in the season and using pots.

The following year, he planted six pots. “Then I went up to a few more, and from there, I kept going more and more. At my peak, I had 250 pots in my driveway. Now, I’ve got 171 of them. I’m doing my favorites and looking at newer varieties — things that would be really unique.”

PEPPERS FROM ALL OVER THE WORLD

Marier, general manager of the Hugo Feed Mill, grows peppers from all over the world, including Trinidad, Mexico, Peru, Brazil, India, Guyana, Colombia and Japan. They come in green, purple, red, yellow, orange, brown, white and peach. There are peppers as big as a softball and as small as a pea. One of his pepper plants is 19 years old.

Each of Marier’s pepper plants features a color-coded tag: Those with white tags are sweet, those with yellow tags are mild, and those with orange tags are hot.

A chili pepper’s heat is measured in Scoville units. Peppers can range from 0 Scoville units, meaning no heat, to more than 2 million; a sweet bell pepper is a 0 on the Scoville scale, a pepperoncini clocks in between 100 to 500, and a regular jalapeno registers around 5,000.

The hottest peppers Marier grows are the Carolina Reaper, the Trinidad Moruga Scorpion and the Death Spiral, which all top 1.5 million on the Scoville scale. “They’re exceptionally hot,” he said. “I’ll eat a small piece. I’ve got friends who will eat the whole pepper, but I’m just not that guy. I like hot, but not that hot.” 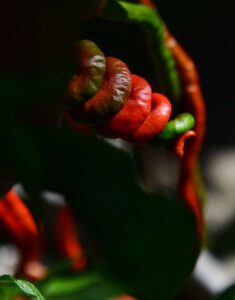 His advice for eating chili peppers is to start small: “You can always go back and get more,” he said. “But once you go in too far, with both feet, you’re done. My advice is to start at the bottom of the pepper and work your way up; peppers always get hotter as you work your way toward the stem.”

If you eat a pepper that burns your mouth, Marier recommends drinking milk or eating yogurt. Dairy products have a protein in them that replaces the capsaicin, the chemical compound that makes chili peppers taste hot, on the receptors on your tongue, he said.

“Some people also say sugar will help,” he said. “Any tomato product helps a little bit. I’ve had people try just chomping on tomatoes. I’ve seen them so hot that people will start spritzing ketchup in their mouth. It just makes you laugh.”

Marier, 67, said he grows hot peppers to add flavor to dishes — not to engage in contests to see who can eat the hottest pepper.

“I like spice. I like flavor,” he said. “To me, just eating a ghost pepper, something like that, would not do me any good. When I make salsa, it’s all about the flavor. Making something stupid-hot is not a challenge. Anybody can do that; just add more hot peppers. I want to get to where you’ve got that flavor of what you’re making, where after a couple of chips, the heat starts building. I like delayed heat.”

‘KIND OF AN ACQUIRED TASTE’

During a marathon salsa-making session last week — “I was up until 2:40 this morning” — Marier made one batch with “extra kick,” he said. “It has some staying power, but I didn’t go over the top because then people won’t enjoy it. If you eat salsa, you should be able to get more than one chip out of it.”

A friend of Marier’s smokes some of his peppers in different types of wood for him, including orange, cherry, mulberry and pepperwood, and then dehydrates them. Marier then grinds them into powder to use in dishes. His dining-room table is lined with more than 400 film canisters and vials filled with more than 300 different kinds of pepper powder.

“Let me see if I can get one that you can smell that’s not going to kill you,” he said, perusing his collection and picking up a smoked fatalii pepper powder from 2017. “Oh, that’ll kill you. I don’t want you to die on me here.”

Marier carries his own pepper-powder shaker with him to restaurants and friends’ houses. “It’s just kind of an acquired taste,” he said. “Now, it’s just what I’m accustomed to. You can take powder with you; you can’t do that with hot sauce. Last night, I went to my daughter’s house, and we had spaghetti, and I took it out and used it there.” 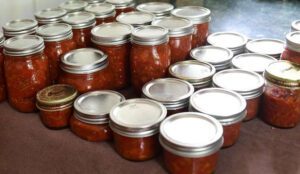 “I pickle almost anything you can think of: eggs, asparagus, cucumbers, carrots, a medley of different vegetables,” he said. “I make an awesome pickled-pepper relish.”

Marier also grows exotic tomatoes: more than 100 different varieties in all. He eats a BLT for lunch each day. He dehydrates tomato slices and seasons them with pepper powder to make “a healthy snack chip,” he said. “You get the sweetness of the tomato and put the pepper part on for a little bit of kick. You can add oregano, basil, Italian seasoning ….

“I’ve actually made a white salsa using white tomatoes, white peppers and white onions. People have said they want me to market some of these things, but then I guess it’s no longer a hobby.”

HammerHeart Brewing Co. in Lino Lakes uses Marier’s peppers to make Thor’s Smoked Hot Pepper Imperial Porter. “Whenever I make something, it’s all written down, so if I ever make something off the chart, I can make it again,” he said.

DOWN TO A SCIENCE

Marier has gotten his pepper-growing down to a science. He takes about 25 of his pepper pots into his house during the winter and regularly tests their moisture level.

“You want to keep it on the dry side, but not totally dry,” he said.

Every spring, he takes a sample of the soil in his gardens to see what nutrients are needed. He plants pepper plants in the ground exactly 18 inches apart to accommodate his drip-irrigation system. He waters them about every three days, “depending on the temperature and the wind and how much they are fruiting,” he said. “They take a lot more water as they get further along.”

Many of his “super-hot” pepper plants are covered with nets and spaced four to five feet apart to protect them from being cross-pollinated. “I’m looking for a pure seed,” he said. “A pepper is self-pollinating, so this way you can cover it to keep the wind and the bees from pollinating them, so they will pollinate themselves, and then you’ll have a true variety.”

The latest project in his private collection is the 7 Pot Defcon, a round pepper with bumps and indentions.

“Some of them are newer varieties I’m just taking a look at,” he said. “I haven’t had them before, so I thought I would grow them out and taste them and see how hot they are. This is over 1 million on the Scoville scale, so they’re hot, there’s no doubt about that.”

Another new favorite is the Pimenta Moranga Peach Cross.

“I think it’s really cool,” he said. “I like the way they look. The peppers are presented almost straight up, and they’re in clumps, whereas most of your peppers are going to hang down individually. These look like a bunch of flowers. That’s unusual.”

Since becoming a grandfather, Marier has started planting more sweet peppers, he said.

“They all used to be really hot, but I’m getting better now,” he said. “I’m starting to grow some that aren’t ballistically hot. I grow some lunchbox ones, snacking ones — they like those.”

TRADING SEEDS ALL OVER THE WORLD 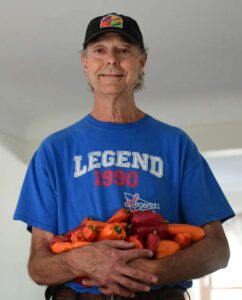 Marier started working at the Hugo Feed Mill when he was 15; the business has been in his family since 1923. He’s lived within sight of the feed mill for all but one year of his life; he has one daughter and two grandchildren.

“I first worked in the lawnmower shop and then moved to the hardware store and feed mill, and I never left,” he said. “I attended Lakewood Community College (in White Bear Lake) for a year, but my dad needed me at the mill, and I was working so many hours, it was hard to do both, and so I just stayed there.”

He has lived in three different houses — all located within a few hundred yards of the feed mill. “If I forget something at home, I can leave my office, run home, come back, and the same song is playing on the radio,” he said.

From his home base in Hugo, Marier trades seeds with pepper enthusiasts around the world. His current catalog of peppers — officially called the “2021 Hugo Feed Mill Pepper List”  — includes 375 varieties, and each entry contains a detailed description. The Aji Charapita, for example, is a “small, yellow pepper that has a distinct fruity flavor. With its size and rarity, it’s known as ‘Mother of all Chilis.’ ”

Another fun fact: It’s considered the most expensive pepper in the world per pound, Marier said.

Also on the list is FM’s Gnarly Bhut Jolokia, an odd-shaped, cream-colored ghost pepper, and FM’s Hot Lemon, a lemon-yellow hot pepper. Both were developed by Marier under the name FM, which stands for “Feed Mill,” he said.

We use cookies to ensure that we give you the best experience on our website. If you continue to use this site we will assume that you are happy with it.AcceptPrivacy Policy